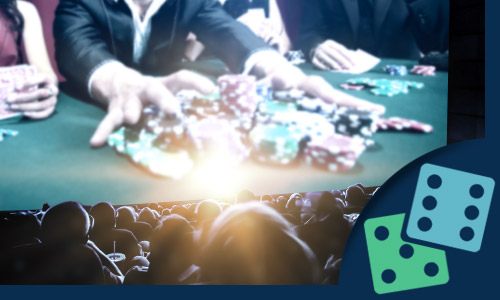 When the last Star Wars movie, The Last Jedi, wanted to show wealth and opulence with a certain social group, they showed them at a casino, presented as something of a playground for the ultra-rich. Even with the sci-fi elements thrown in, the casino undeniably played a big part in helping the director set the mood and look he wanted. Even online casino games use iconic imagery, and so do the current crop of films.

The casual appearance in Star Wars points out how common it is to see the casino in mainstream films. The following is the Top Five Films Featuring Casinos.

The obvious choice for the top spot in any countdown of casino films Casino, directed by Martin Scorsese and starring Robert DeNiro. It tells the story of the men who ran the casinos, giving a gritty but realistic view of the gambling world at a certain stage of casino development, specifically in the 1970s.

The performances, including those by Joe Pesci and Sharon Stone, are spot on. As is the mood inside the casino and behind the scenes. The story is based on something real as well, lending the film an additional level of credibility. It doesn't really need it. The film stands up to the toughest critic.

Casinos are always vulnerable to a group of smart college students. That's possibly the biggest takeaway of the fast-paced and fascinating film, 21. Based on a hit book about a group of card counting MIT students who learned an advanced method of rising the odds in their favor. The results of the method are staggeringly good when they hit the casinos.

Of course, all good times must come to an end, and the casinos ultimately grow wise of the method. At that point, the drama in the film heats to a boil. It's easy to see why the story in book form found such a large and diverse audience. The visuals in the book are made real in the movie.

3. Fear and Loathing in Las Vegas

Although the casino itself is not a vital part of the action in this film as it is in others, the entire madcap adventure takes place in the city of Las Vegas (or at least on the way there), so it's never too far from breaking into a dramatic game of poker.

There are, of course, enough visits to the casino to justify putting in on a list of casino films. But the real gambling that seems to be taking place in the film is on their own mental and physical health. The literary masterpiece is rendered faithfully to the source.

Ocean's 11 is another film that uses the casino to denote riches and elegance. It centers on a plot to steal money from a bank that is holding millions of dollars belonging to four different casinos. The film alternates between funny moments of banter by the all-star cast, which includes George Clooney and Matt Damon and moments of high drama and action. In short, Ocean's 11 has it all.

Rounders is the second film on this short list to include Matt Damon in a leading role. This time, Damon is the star of the film. Unfortunately, he's completely upstaged by Edward Norton, who plays a slightly unhinged gambler in a performance that is difficult to look away from.

This film does not see the casino as a glamorous room with sharp-dressed people and the constant flow of money. Instead, most of the real gambling takes place out of the public eye, in underground poker games. By the end, the characters have staked their claim to a spot on the world series of poker.