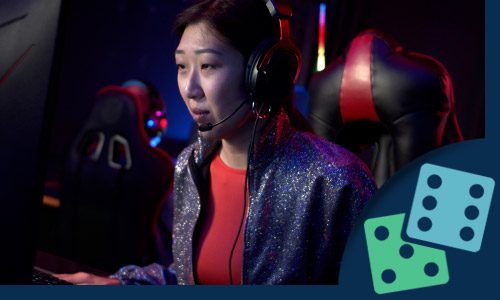 New research shows that the number of women playing casino online games and video games in Asia, both professionally and on an amateur level, is rising more rapidly than the numbers of new male gamers. Across all of Asia’s key markets including China, Japan and India more women than men are getting involved in the industry.

The industry is taking note – 48% of gaming revenue worldwide comes from China where, last year, the number of female players grew by 19%.  Rohini Bhushan, at Google Asia Pacific says that Google and others in the industry are taking note. "Among the millions of gamers joining the ranks every year, females have been a huge catalyst for growth."

In a study carried out by Google in collaboration with market researchers Niko Partners, researchers determined that the number of women gamers accounts for 38% of the  Asian gaming population of 1.33 billion. China has the biggest percentage of female gamers at 45% while in Southeast Asia, Japan and South Korea, the figure is 40%.

The rise can be attributed to multiple factors.

The expanded access to mobile plays a significant role in the increase in women in the gaming world. Matt Brocklehurst, head of apps, partnerships and platform marketing for Google Asia Pacific told the BBC that "More and more female gamers are drawn to the fun, flexibility and freedom that mobile gaming affords. This is especially the case in Asia, where mobiles are the primary internet-enabled device for many people."

In addition to the gaming fun, many women are drawn to the field because the best players can play in esports competitions and earn tens and hundreds of thousands of dollars every year through combinations of prize monies, sponsorships and endorsements. Gaming is also a good way to get into the influencer industry where there’s more money to be made by live-streaming games that people then pay to watch and companies pay to stream.

As the “pioneers” experience success, it encourages others to join them. In Asia, entire leagues and teams are made up of female gamers. There’s even a Female eSports league which helps boost female representation in competitive esports by focusing on games that are played by women. The popularity of this league can be seen by the number of companies who have become sponsors including the large mobile communications firm of Singtel.

In Asia, entire teams and leagues made up of female gamers are now making an impact on the world stage, including the Female Esports League, a regional gaming circuit to help boost female representation in esports. Singtel's Marketing Head Cindy Tan told BBC, "We aim to raise the visibility of female gamers and support their professional growth as part of our efforts to create a more inclusive environment, and enable everyone to come together and pursue their passion for gaming."

The Industry is taking note. Reia Ayunan, a former professional gamer whose live streams enjoyed great popularity in Indonesia, Malaysia and the Philippines said that she is noticing more female players online. "While there are some leagues working towards equality in the pro scene, society still assumes that women/girls don't like playing video games, therefore we're not the target demographic of the gaming industry." Ayunan was recently hired by Ubisoft, a video game creator, to develop game content to attract females.

Professional gamer Amanda Lim, who plays for the We.Baeters, an all-female team, says  that female gamers are less well-known. “But I think in time that will change as more of us start playing. We can be as strong as males."

Another streamer,  Valerie Ong of Singapore, notes that the social aspect is especially appealing to women gamers who enjoy the interactive engagement of competing with other players  from around the world.  "I play with other people online which makes it super fun as we can joke around with one another while playing." she said.

One of the biggest barriers with which women gamers struggle involves online harassment. Ayunan described her experience. "I was turned into memes and even was a victim of sexual harassment online. Once you go public and you get noticed there will always be people hating on you, finding faults and mistakes. The gaming community can be very toxic."

Despite backlash, more women are coming forward with stories of sexual harassment, bullying, abuse and gender-based discrimination within the gaming community. Worldwide, the problem seems to be one that the industry can no longer avoid.

The first load of stories was made public in 2014 with “Gamergate” and resulted in threats of death, hacking, doxing and threats of sexual assault against women who shared their experiences. Little change resulted but now a new wave of shared experiences has surfaced, giving women players the hope that something may change.

Much of the change is coming from within the gaming industry which has become more proactive in withdrawing sponsorships,closing or suspending accounts and disassociating from those in the industry who have been accused by multiple women of harassment.

Women gamers in Asia and around the world are also frustrated by the pay disparity between male and female gamers. Some male gamers bring in upwards of $2 million a year in prize money, sponsorships and other income. Female pro gamers earn much less.

Shan Chen, a 20-year-old team member from Wuhan China said “In the past when we played games in competitions, onlookers would say, these girls play really badly. They would mock us and say they should play and that we should get off the stage.”

The situation is improving as Chinese female gamers create their own professional leagues. Women-only competitions, however, are played less frequently and more sporadically.

Ding Ding, a Korean player currently on a Chinese women’s team said, “There are no female teams in Korea at the moment, but in China there are. It’s more organized here. I have improved a lot here. But compared to male teams, it’s still not enough…..There’s still a long way to go if we wanted to get to a similar level with male teams.”