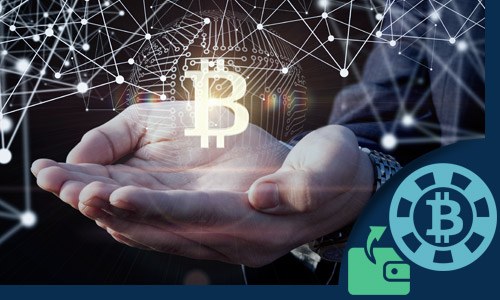 If there was ever a match made in heaven, it would be the union of the online casino and Bitcoin, the virtual currency that is threatening to overturn the power structure of world-wide institutions. The price of Bitcoin suddenly edged up around the beginning of the year to the point where no one could simply dismiss the currency. It has since had some ups and downs, though it has yet to return to the dizzying heights it enjoyed just a few short months ago.

It's a perfect match for online casino game because the currency itself is a form of gambling. Investing in Bitcoin is as much a game of chance as anything in the online casino. The biggest difference is that with slots or roulette, you find out the within a few moments. With Bitcoin, the vagaries of the market mean that the results of an investment will not be known for a long time. It depends on your patience and some good fortune to wind up with a windfall in the investment.

Despite what people think about the technology underneath Bitcoin or of what it heralds as the next evolution of the Internet, investors are flocking to buy Bitcoin, or even other cryptocurrencies. The fear and respect taking place only adds to the mystique of the currency.

With its innovative blockchain system, the greatest innovation Bitcoin has brought the world is not necessarily the first viable digital currency. The real impact the currency itself is likely to have is the fact that the system does not require regulators to keep an eye on it. That means no one can block a transaction, even an anonymous one, and no one can close down an account. It is as close as the world has come to anarchism entering the mainstream.

That lack of regulation has certainly raised some eyebrows in the halls of government and big business. Some states are looking for ways to slap some level of oversight on the currency  to keep it under control to a certain level. Big finance has also called for ways to regulate the currency so that it can become a mainstream choice.

But the original generation of Bitcoin enthusiasts is not interested in making the cryptocurrency easier to control and harness. The appeal of virtual coins started from the deregulation dream they all shared. With banks, governments, and even stock markets unable to stop the currency from moving as its owners will it, the power lies entirely with the people.

Playing Slots as a Subversive Act

Although online casino games are too popular with a broad cross-section of the public to be truly considered subversive, adding the element of Bitcoin to finance the games adds a degree of outlaw appeal to the experience. The fit, however, is excellent.

Bitcoin is the first true digital currency, but casino fans have been turning their normal cash into some form of digital currency for years. They need to get their money online in order to purchase playing credits to add a stake to the games and make them more fun. It's possible to use credit cards, but if people prefer to use some form of  e-banking to convert their currency, services like Neteller or Skrill are ready to help.

Bitcoin takes the operation to the next level, making it easy for people to trust their digital currency as though it were backed up by sacks of gold somewhere in the back end of the experience. Instead, what people have is a ledger that keeps the books straight and the trust high.

That's another way that Bitcoin is like a game in the online casino. It's all based on trust, but even if the trust starts to wane, the technology behind each of them keep the integrity of the experience and brings people back to a state of trust.

In some ways, Bitcoin may be an extension of most online casino games.