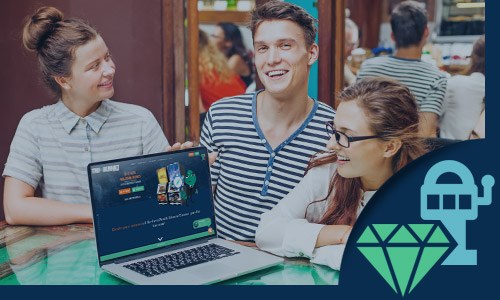 The Internet has created a platform for games of all kinds. There are enormous, multiplayer games that have the look and feel of joining into a full-fledged movie. There are competitive games that offer rewards to the winners – those who vanquish their opponents and take on all challenges. There are also all types of small scale games that people can play at their desks at work, sort of like people have always played digital versions of solitaire since the modern computer came into existence.

All these games try to solve one of the great conundrums of our times – how do we spend our time in a meaningful way that Is both entertaining and engaging. The best answer to that most modern of dilemmas is provided by the online casino. But it also adds another layer to the answer to that question. Just as the real casinos in their time, the online casino shows that games can be engaging and exciting, but also bring people together.

In casino games, there is a level of competition. But that competition is not with other players. It is against a dealer who represents the house, or the casino, and most of the time, unless we are playing card games, we don’t even think about being in the picture. It’s a form of competition that isn’t really against people. In fact, it’s more fun to play with other people, not against them.

Everyone Is Equal in Front of a Slot Machine

What makes casino games a perfect social activity is that it cuts through all of the advantages people naturally bring to the table when they play other types of games. There is nothing but luck, or nearly nothing but luck in some games but mostly luck just the same, that determines whether people win or lose. It’s not skill, experience, or even any deep levels of focus. It’s something everyone has equal access to and equally can’t control.

In other words, the slots game does not know that you spend two hours each day practicing slots of all types. No matter what you’ve done before or plan to do in the future, each time you spin the reels, they land in a random way that can never be completely predictable. Perhaps a person who is deeply in touch with his or her intuition can start to guess what will happen with greater accuracy, but each game is still an event of its own, independent of anything else. It is a world, and it’s another world the next time you play.

And since it’s all equal, it’s great to play with a partner or in a group. The fact that you can pit your luck against another person’s luck is completely different than pitting your skill against theirs. You never actually defeat someone if you win more than they do. It’s simply that your luck that day was stronger, or the random triggers went your way. The only thing you can feel is that you were more lucky.

The Thrills Are Real

The main reason people come to play online casino games is the chance to play for real money, especially in a setting where they have little or absolutely no control of the outcome. It’s one thing to try to win a prize by completing a special task better than others. It’s another thing to win because the forces of nature lined up just right for your advantage.

But the unknown makes the risk real when you place a bet on a game, and that makes it so much more fun than when nothing is on the line. There is an actual stake on the outcome of the game, and all you can do is wait to find out if you’re a winner. Of course, that thrill is present whether you win or lose.  That’s another thing that makes it such a unique experience in the annals of gaming. Winning may be the goal and it may be more fun to win than to lose, but what other games are there on the Internet where the peak of the game comes just before the finish?