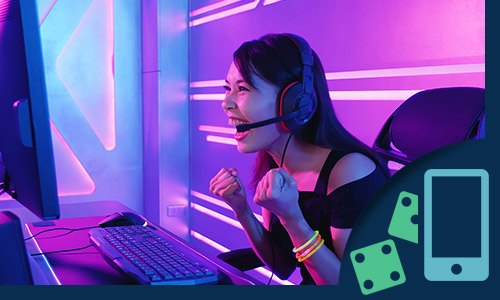 According to recent research, the number of female video games players is growing at a faster rate than their male rivals, especially in Asia. Throughout the big online casino gaming markets, women are leveling the playing field in the world of video gaming. Rohini Bhushan, an analyst at Google Asia Pacific says, "Among the millions of gamers joining the ranks every year, females have been a huge catalyst for growth."

Worldwide, 45% of video game players, and 46% of video game purchasers, are women. The rise in women players has been credited to a wider variety of games offered and to the fact that today’s games feature more complex storylines and more personalized characters. In addition, the public is more accepting of “geeks,” including female geeks.

A 2019 study, “Essential Facts About the Computer and Video Game Industry,” conducted by the Entertainment Software Association, reported that in the United States, two-thirds of all U.S. adults (65%) play video games – PC, mobile or video console. The report noted that, not only do older Americans play at a rate similar to those under 18, but that there are more and more women playing games as well.

Nowhere in the world, however, are the numbers of female players increasing faster than in Asia. In 2019, Asia’s gaming market was estimated to be 1.3 billion and the numbers of female gamers was 38% of that number. In China, women account for 45% and in Japan, Korea and other Southeast Asian nations, the figure is 40%. Mobile gaming is the biggest growth market and that attracts women.

Matt Brocklehurst, Google Asia Pacific’s head of apps, partnerships and platform marketing said, "More and more female gamers are drawn to the fun, flexibility and freedom that mobile gaming affords. This is especially the case in Asia, where mobiles are the primary internet-enabled device for many people."

One area in which the increase in female participation can be seen is in the realm of competitive online gaming. eSports has been becoming extremely lucrative in recent years and after sporting events and sports betting closed down in March 2020, esports exploded in popularity.

Many of today’s top Asian esports competitors are women. Top esport gamers have earned over $20 million through prize money, endorsements and sponsorships. Many have become key influencers and host millions of fans who watch their games online via live-streaming.

Womens’ teams and leagues that are entirely made up of female gamers have formed in Asia and they have been extremely successful in international competitions. They are making a huge impact around the world. One of the first and the most successful of these is the Female eSports League which is dedicated to boosting female representation in esports.

The league was sponsored by mobile communications firm Singtel. Singtel spokesperson Cindy Tan explained the firm’s commitment to women in esports, saying "We aim to raise the visibility of female gamers and support their professional growth as part of our efforts to create a more inclusive environment, and enable everyone to come together and pursue their passion for gaming."

Observers say that female teams’ live stream tends to be comprised of viewers from Malaysia, Indonesia and the Philippines. Female players are also facing more competition from other female players and that engages viewers. One esports analyst has noted that "While there are some leagues working towards equality in the pro scene, society still assumes that women/girls don't like playing video games, therefore we're not the target demographic of the gaming industry."

As with anything new, a dark side to the rise of female gamers has surfaced. Many female gamers find that they must confront sexism and online harassment. One player described her ordeal. "I was turned into memes and even was a victim of sexual harassment online. Once you go public and you get noticed there will always be people hating on you, finding faults and mistakes. The gaming community can be very toxic."

It’s a growing problem. A survey on women in esports shows that 7% of female gamers are harassed via social media after they reveal their gender online.

For years, the general perception of dedicated gamers was that they were anti-social, lazy loners who couldn’t function in society. While the upsurge in esports popularity has done much to mitigate that view, the industry now needs to confront the issues of sexism in the industry and harassment of female players. Female

esports competitors and observers note that there is only one woman among the highest esports earners and the top 10 female esports gamers are earning less than $800,000 collectively while every one of the top 10 men earns close to $2 million EACH.

Chiquita Evans was the first woman to be drafted into the NBA 2K League. She said that as soon as she spoke on voice chat and it became known that she was female, she was frozen out in the league Combine.

The harassment comes in many forms – online stalking, rape threats, threats against their families and loved ones, insults, sexist comments and profanities. 26% of the surveyed women reported that after they revealed their gender, they were accused of cheating or hacking and 54% were asked for sexual favors.

The women are left to their own devices to protect themselves. Some user gender-neutral screen names and others mute or block toxic commenters. About a quarter of the players lie about their gender and avoid voice communication entirely. Some women players have been known to create male avatars so that they can more easily play without harassment.

Critics say that the gaming community isn’t doing enough to confront the issue. Some studios are being careful to employ more women and some of the leagues are banning players who use racist or anti-female slurs and insults. But all agree that more needs to be done to protect and create safe spaces for the rising numbers of women players.