Gaming and Gambling Around the World

How Does Gaming and Gambling Differ in Varying Cultures Around the World? 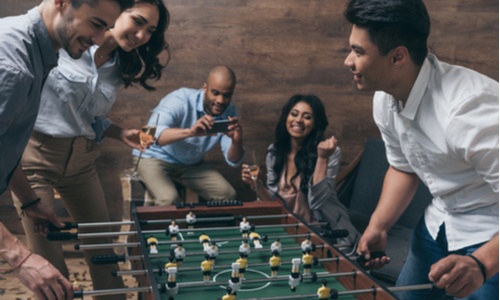 Gambling laws differ vastly from one country to the next. In many areas of the world, the gambling laws of 2022 have been influenced by hundreds of years of gambling culture that have led up to today’s guidelines. What are some of the cultural norms regarding gambling that are impacting on real money gaming today?

Gambling is one of the world's most popular pastimes but it’s definitely not a new activity. Historians say that gambling can be traced pack dates back hundreds of thousands of years. Six-sided dice have been found in archaeological excavations in Mesopotamia that date back to about 3000 BCE but they are known to have been based on astragali that date back thousands of years before that. Dominos and lotto games, including the first-known keno-like games, were popular in China as early as the 10th century and a thousand years before that there is evidence of betting on fighting animals.

Playing cards seem to have evolved from 9th century China while records from Japan trace gambling back at least as far as the 14th century BCE and As-Nas, which was the forerunner of poker, dates back to the 17th century BCE Persia.

Over the years, different standards, many of which derived from religious norms, became accepted in various parts of the world. In some instances those rules outlawed gambling of any type while in other  cases, some types of gambling were accepted and others were banned.

What does gambling look like today at the Thunderbolt online casino and across the world based on varying cultural traditions and norms?

England is famous for its corner bookie shops that once accepted legal sports bets in a jolly atmosphere of camaraderie and neighborhood good will. Some sociologists say that that kind of welcoming environment dated back to ancient times when pagan peoples on the British Isles believed that they could communicate with the gods through rolls of the dice and other games of chance. In fact, some of the pagan rituals incorporated games of chance.

In the Middle Ages there were two forms of gambling in England – games that required no skill and involved simple guesswork (such as the official lottery, introduced by Queen Elizabeth ! in 1569) and wagers on contests that involved both chance and skill (horse racing, where people could never be sure which horse would win but could make educated guesses based on the animal’s history, the weather, the track’s condition, etc).

The lottery ended in the 1800s when it became hard for people to afford the price of tickets but betting continued in many forms including the bookies shops and gaming clubs where wealthy members of high society would gather to place wagers on games like roulette and craps.

Today betting is legal throughout England on animal races, sports, land-based and online gaming machines and slots. The British parliament has tightened up rules for fixed-odds betting terminals (FOBTs) and is now considering new rules to restrict online gaming machines because of worries that such machines operate so quickly that people lose money at an abnormally fast rate.

While Africa is a unified continent there are widely varying gambling norms from country to country. Muslim African countries generally outlaw gambling – though illegal gambling opportunities exist and South Africa has a thriving land-based casino industry. Most African countries allow online casinos to operate within their borders.

The earliest archaeological evidence of gambling in Africa comes from Egypt where dice bating back 3000 years have been found. Horse racing (and betting on those races) has been popular in many African countries for  hundreds of years. Additional evidence of early gambling has been discovered in Madagascar where the Tanala mountain people where researchers have found linguistic evidence of the word “bet”.

South Africa was heavily influenced by Christian missionaries who encouraged the government to ban most forms of gambling (betting on horse races was allowed) but in tribal homelands, people did play betting games. In 1965 the government passed the Gambling Act that made all forms of betting illegal but by 1994 the government reversed itself and the country opened up to casino gambling and a national lottery.

Recently, online casino gaming has become popular in South Africa. Its legality is unclear but the government allow offshore casinos to provide services to people within South African borders.

Aborigines in Australia played games with prizes being barter items such as food, tools, ochres, raw materials, shells and stories. Some of the games played by the aborigines include Weme, a stone-throwing game and the Buroinjin ball game.

As European immigrants immigrated to Australia during the 18th and 19th centuries they brought with them many of the dice and card gambling games that they had enjoyed in Europe. Slowly, gaming became one of the most distinctive aspects of life in Australia. Australians today are avid bettors on their national sports of rugby, cricket and soccer but they are also avid slots enthusiasts which they play at both land-based Australian casinos and online offshore casino websites.

The Australian government is considering changes to the  existing gambling legislation, specifically regarding pokies advertisements that are seen by minors.

Japan is a very conservative country where gambling is highly regulated but that wasn’t always the case. Historical references to gambling in Japan date back to the 8th century C.E. with descriptions of sugo-roku, a backgammon-like game that occupied the emperor and the royal court.

Bakuto, professional gamblers, terrorized the capital city of Heiankyo  leading to edicts that prohibited gambling. The anti-gambling sentiments have carried through the years until today when a pinball-type game known as pachinko, played in pachinko parlors, offers the only legal gambling outlet for Japanese citizens.

Japan recently passed legislation   authorizing casino resorts in Japan but Japanese citizens will be limited as to the amount of time that they can spend in these casinos once they are built.