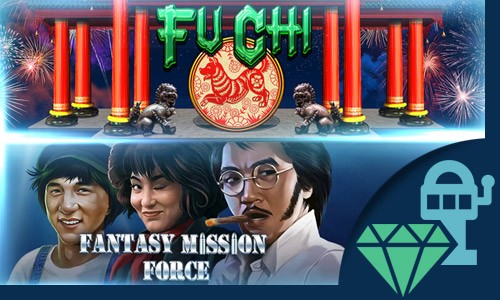 Big wins, higher than average RTPs and a flurry of cash generating slots features are standard February fare at Thunderbolt Casino.  This month and every month you’re invited to dip into a selection of smokin’ hot RTG multiline slots games fresh from the production lines.

As can be expected from the gaming gurus who launched real cash random activated jackpots, brand new titles are saturated with multiple payout opportunities, big bold bonuses and great gaming features.  Factor in fab themes based on classic cult movies and astronomical events and there’s E for entertainment available directly at your fingertips!

So whether you’re an Aussie, Canadian, Kiwi or South African or reside in London, Hong Kong or Macau, there are a couple of Far Eastern RealTime Gaming slots that are simple baying for your attention:

Fire Up Fantasy Mission Force RTG Slot on Your Phone

RTG has dipped into an action-packed cult movie classic and emerged with a clear winner in the form of the 5 reel and 20 payline Fantasy Mission Force video slot.  In this high variance game based on the 1983 film of the same name you’ll encounter some of the era-defining heroes and heroines of Far Eastern film.

Luminaries like Jackie Chan, the beautiful and decidedly raunchy Brigitte Lin and legendary Taiwanese actor, film director and screenwriter Jimmy Wang have been plucked off the celluloid and deposited onto the reels.  And in keeping with the theme, the rest of the gaming symbols represent an arsenal of deadly weapons.

But before you start exposing scatters, wilds and matching symbols on the reels you’ll be given the opportunity to get right into the buzz of the Force.  There’s a cool little clip of the original movie - which by the way was filmed in Mandarin - that’ll give you a brief idea of what’s really happening behind your gaming interface.

Great Game Theme: What’s it All About?

Fantasy Mission Force is one of those movies that can easily fit into just about any genre - horror, action, thriller, drama or romance.  It’s about a hardnosed lieutenant who is given the unenviable task of releasing four allied generals from the evil clutches of Japanese soldiers.

There is of course a huge amount of money in play to incentivise Lieutenant Don Wen to take on the job, a man who outmanoeuvred the likes of James Bond, Snake Plissken and Rocky Balboa to land the big paying contract!

The movie follows the dangerous and sometimes hilariously unbelievable travails of Wen and his motley crew as they fight off man-eating cannibals, spear-throwing tribesmen, vampires and Japanese Nazi to rescue the hostages.

It’s a film that has all the ingredients of an entertainment showstopper from jaw dropping fight scenes to plenty of guts and gore.  And if you are wondering what the central characters in the video slot are really like, the ‘hero’ is a money hungry double crossing cad and his lady friend a bazooka touting femme fatale clad in a figure hugging outfit and bright red knee high leather boots!

Jackie Chan is a young and incredulous small-bit player who only makes a few brief appearances in the film.  The rest of the cast are team members like con artist and escape artist who become ‘collateral damage’ right at the end!

We now know a bit about the movie but how about the game features?  Play Fantasy Mission Force slot on your PC or device and you’ll unleash explosive money action.  Payouts are billed by the top paying character symbols, 7 Dynamite free spins with 3x multipliers and wild symbols that juice the bottom line by doubling all payouts.

If that’s not enough to entice you to ante up and join Billy, Lily, Sammy and lieutenant Don Wen on the reels, maybe the $5 000 random jackpot will.  Miss out on the major money prize and you can still bank plenty of crisp hard cash when you line-up the main protagonists from the movie along cash activated bet lines.

Fantasy Mission Force is a high variance video slot with a average return to player (RTP0 of 95.3%.  So if you’re looking for a thrilling gambling opportunity that pays out relatively large cash prizes on a sporadic basis, the Jackie Chan themed casino game is hot... real hot!

Fu Chi slot is a calm yet equally rewarding gambling opportunity based on the Chinese sign of the dog.  The scene is set in the entrance of a Taoist temple, where red is the overwhelming hue.  As with all great RTG slots your task is to chase symbol combinations on the reels - and get paid out for the pleasure.

All you have to do is match fire crackers, red lanterns, Chinese symbols, bags of money, fruit and lotus flowers to trigger line wins.  But the best opportunities are unlocked by the wild dog and zodiac scatter that can complete and double payouts and unleash up to 30 retriggerable free spins with 3x multipliers, respectively.

For those of you who are not familiar with the magic of RTG video slots, there’s a minor ($250) and major ($1,000) fixed jackpot in-play that can be randomly activated after any spin.  Woof!