Elon Musk and SpaceX Pull off A Great Rocket Launch 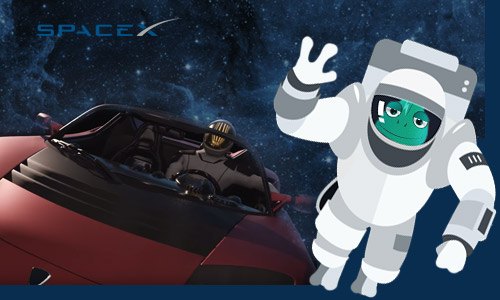 On February 6, SpaceX, the space exploration company founded by Elon Musk, launched a triple-rocket, called The Falcon Heavy, into space.  The rocket is expected to fly past Mars and head into the asteroid belt.  After the two boosters deployed the center rocket further into space, they returned to the launch pad and landed, making this the first space launch in which boosters have returned successfully to Cape Canaveral.  You can view the entire, exciting event here.

The center rocket then deployed a Tesla Roadster with a mannequin in the driver’s seat, David Bowie’s song “Life on Mars” playing at the highest volume possible, the catchphrase “Don’t Panic” emblazoned on the car

SpaceX is just one of the several initiatives Elon Musk has developed in his 47 years.  He founded the company that later became PayPal and sold it in 2002 for 1.5 billion dollars.  Musk parlayed those dollars into SpaceX in the same year.  In the ensuing 16 years, SpaceX has taken the initiative in several space explorations, becoming the premier privately-owned space exploratory companies in the world.

Musk’s stated goal when he founded SpaceX was to develop the company into one that could deliver supplies to the International Space Station (ISS), astronauts to the ISS, and possibly, sometime in the future, to bring hardy space explorers to the ISS, to the moon, or to Mars.

Six years after founding SpaceX, in 2008, the company was awarded NASA contracted with SpaceX to deliver goods and equipment to the ISS.  SpaceX worked on the technology for four years.  The original rocket was called the Falcon 9.  It carried 1000 pounds of supplies to the astronauts at the ISS in its initial flight. It bears mentioning that the Falcon 9 and now the Falcon Heavy are the first privately owned rockets to be launched into space.

SpaceX launched Falcon 9 into space in 2013.  The rocket carried a satellite for Earth orbit.  Even more significantly, in 2015, SpaceX launched a Falcon 9 that carried a Deep Space Climate Observatory.  The purpose of the observatory is to study solar waves that emanate from the sun and could interfere with electrical and electronic systems here on Earth.

This kind of event is called EMP for Electro-Magnetic Pulse.  An EMP can also be created in a hostile military attack when a nation explodes an atomic weapon high in the atmosphere.  The observatory sent into space by SpaceX cannot predict or prevent such a massive attack on a county’s electrical grid and electronic infrastructure.

The observatory studies the sun.  In theory, it could report back to Earth of suspicious and potentially dangerous activity on the sun.

The Falcon Heavy rocket actually is a closely synchronized set of three Falcon 9 rockets.  In a stunning engineering feat, SpaceX engineers programmed the two side rockets, which gave thrust to the center rocket, to fall away and return to the launch pad.   The return of the booster rockets was intended to make them usable in later launches.

It took only eight minutes for the side rockets to complete their mission.  They disengaged from the center rocket and came back to land at the launch pad in Cape Canaveral.

As they landed softly on the launch pad, the crowd of about 100,000 onlookers let out a vociferous roar of approval.

After the center rocket disengaged, a Tesla Roadster was left to travel in space.  The roadster carries one “passenger” a mannequin dressed like a space traveler.

In addition to the mannequin, the roadster is carrying a copy of Isaac Asimov’s Foundation trilogy and 6000 names of SpaceX employees.

In the hours before the launch, Musk said that he thought there was only a 50-50 chance that the launch might succeed. So much could go wrong he said repeatedly.

Elon Musk was clearly the most frightened viewer.  The 100,000 onlookers and his employees were all very confident that the launch would be successful.

He knew that no one would die in the launch but was afraid of a destructive fire that might destroy the launching pad.

In the end, and despite Musk’s cup half empty attitude, the launch was a great success.  Employees were unable to put into words their joy.  The most common comment from an employee was hard on.  The most articulate comment most of them were able to express was “wow”!

Musk will never give up on his dream to make space travel safe and affordable for large groups of people.  SpaceX is still far from ready to offer space travel to civilians but is planning to take astronauts to the ISS later this year.

A Different Sort of Billionaire

Despite his great wealth, Elon Musk has far more in common with the famed “Rocket Boys” who, as teenagers, developed their own simple version of a rocket in West Virginia in the 1950’s and used their knowledge to escape the coal mines and became scientists than with other great billionaires.