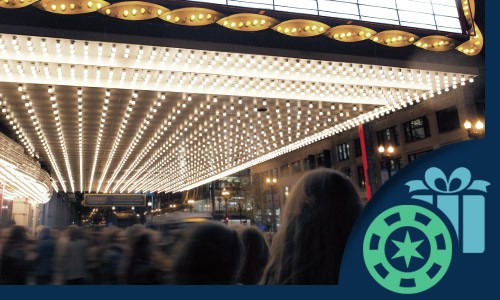 The intense popularity of the online casino is a clear extension of the enduring popularity of casino games in all formats. The most recognizable forum for top level casino action is the real casino in places such as Las Vegas or the Riviera. But casinos, and the games they represent, are not just places to play thrilling games of luck. They are also iconic symbols across all forms of popular culture.

Casinos or casino games have appeared in movies, books,  and songs and everything in between. The following are some of the most common places they appear in our arts and entertainment.

The connection between online casino games and other cultural expressions is obvious - one flows out of the other and often back again. Casino games are created out of iconic books, video games, music and more. The popularity of the online casino version often adds a dimension of fame to the piece and brings it to a new audience.

Setting a film inside the workings of a casino provides insight into how the business operates and how the role the players have in the ecosystem and that is what Casino does. That the film was made by Martin Scorsese and stars none other than Robert De Niro only proves that it was looking for gritty realism over cartoonish stereotypes and  exaggerations.

While the moral fiber of the characters may not always be their biggest advantage, the excitement of the casino is drawn with sheer delight. It's almost impossible to watch the film and not feel a little bit closer to the casino itself.

Best-selling non-fiction accounts of beating casinos through advanced planning, strategy, and teamwork have become their own genre in recent years with titles such as Bringing Down the House. But to really get to the heart of what literature offers, it's essential to go back to the classics.

One of the great works of Russian novelist Fyodor Dostoevsky is The Gambler, a work about gambling on almost too many levels to count. The author actually wrote it to cover his own gambling debts, which made the gambling in the novel pulse with depth and realism. Dostoevsky was personally acquainted with the highs and lows of his favorite game, roulette.

Written during his most intense playing period, The Gambler captures the hopes of getting out of debt with the stroke of luck that comes from the spin a wheel. The obsessive nature of the main character is a mirror for the haunted soul of the author at the time, and the exhilaration that roulette brings him is believable because of the art and skill of the author in conveying his own emotions.

Casino references in popular music are so common by now that they hardly even register. Is the Queen of Hearts in Juice Newton's popular song of that name a reference to a poker game or to a woman's emotional state?

The answer, in almost every case, is both. It's a reference to a game, and to something else the game represents in a person's life.

Anyone who grew up in the 1980s knows the cardinal law of card games, in or out of the casino - you never count your money while you're sitting at the table. That's because Kenny Rogers's "The Gambler" was impossible to avoid on the radio, in pubs, or anywhere that popular music could reach. It was the rare country song that appealed to pop music fans, and was catchy enough to bond generations rather than extend the gap between them.

The song tells the story of a traveling gambler who, on a long and lonely train ride, imparts his life wisdom to the singer. The key, he tells him, is to learn how to read the faces of the players to figure out when hold on to your cards, and when to throw them away. In the end, the singer finds an ace in the advice from the gambler.