Cards Vs. Slots - The Ultimate Showdown 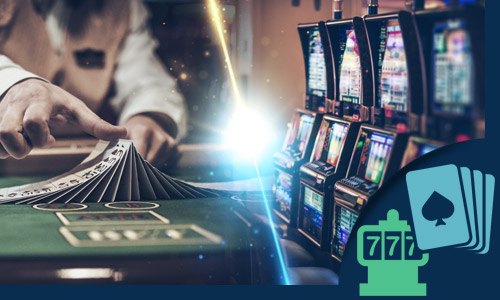 The casino online offers a wealth of betting opportunities that capture just about the entire history of the casino in all of its manifestations. There are dice games that go back to the earliest days of gambling, and even some of the more sophisticated games, like roulette, have a long and vivid history before they arrived in their current form.

So when it comes time to choose a game, it's usually one of more than a hundred slots games or a variation of one of the card games. Which one has the edge? By the numbers, it appears that slots have the clear advantage, but that could be a product of variety as much as a genuine preference on the part of the players. Card games have their boosters as well, and it's not surprising that casinos with live dealers attract more players to the poker tables than casinos that don't have them.

The Argument for Slots

Although slots games were once the kid brother of the online casino - little more than a digital recreation of the mechanical version of the game - it soon grew into its own identity and soon began to exceed all of the other games in the casino.

What happened? Game developers discovered that slots have more potential for creativity than any of the other games. There is virtually no limit on what developers can do with the symbols and the number of special effects they can add.

The turning point came early, when developers increased the number of reels from three to five, allowing for a huge increase in the number of pay lines that were possible on every spin. Add to that special elements such as wild symbols, scatter symbols, and free spin features, and you have some pretty dynamic games online.

But what is it that makes slots games so much fun to play? Slots are perfect little bursts of pure gambling. No matter how immersive and atmospheric the games are and how engaged a player can get when he or she plays, the simple truth is that it there is no skill involved in a game of slots. Winning or losing is based entirely on luck and the random spins of the reels. That means that every spin is just as likely to be winner as the next one, or the one that came before. It's a game of infinite hope, and infinite excitement when there is real money on the line.

The Argument for Cards

Although cards have been around for centuries, and games like poker have a history as long as any game in the online casino, there is no question that games online are different from games in the hotel casinos or at poker nights held in people's homes. The digital advantage is still present, allowing for a greater variety of games, and an easier time switching from one variation of poker or blackjack to another.

Card games require more practice than slots games, but for people who like to see their time bring growth and advancement, card games offer a more fulfilling experience. It all comes down to what you like - luck or skill. Slots are perfect for the purists who want luck to rule entirely. Card games are for people who like to flask some skill, and win because of it.