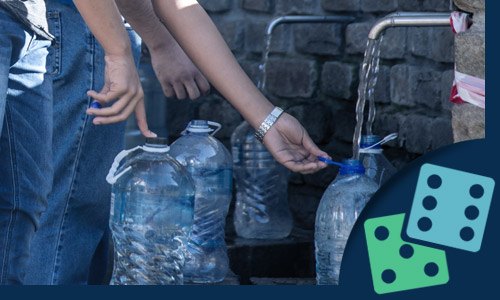 There is an interesting correlation between the unfolding and ongoing water crisis in Cape Town and the concept of gambling, especially responsible gambling.  In short, the city and people of Cape Town have been gambling with their water supply for years in much the same way that a problem gambler gambles with money he or she cannot afford to lose.

The situation with the Cape Town water supply has been in the news for months as dire warnings were issued by experts who predicted that the entire water supply would dry up in 2018.  Almost on a weekly basis, the date that the last drop would be taken from the supply was moved up.  Now the end of the water supply is upon the city and the news reports are that the city has finally begun drilling in the Steenbras aquifer.

Ecologists came out this week with a dire warning of their own to wit that drilling in the Steenbras aquifer endangered already rare and endangered species that live in the waters.  The Steenbras aquifer is alternatively called the Table Mountain Group (TMG) aquifer.  In any case, the ecologists have said that the aquifer supports a delicate ecosystem and that drilling there puts species at risk.

The fear that the ecologists are raising is that the drilling is being performed in the Kogelberg Biosphere Reserve which was designated a reserve years ago because it is home to many rare species.

Reports state that the ecologists are asking that drilling in the reservoir stop not because they are certain that rare species will suffer from it but because they fear that such an eventuality is possible.  The Kogelberg Biosphere Reserve is one of several reserves that occupy the protected Cape Floral region.

Imminent Need for Water from an Alternative Source

The city of Cape Town finally recognizes the danger it is in from the imminent lack of water.  So they are looking for alternative sources of water.  As much as the ecological experts don’t know with certainty that drilling in the TMG will be disastrous for the local ecosystem, Cape Town doesn’t know how much water they may be able to draw from the aquifer.   Estimates range from 25 million to 60 million litres each day.

This week, Xanthea Limberg, a member of the Cape Town council committee that deals with water and waste management admitted that the city had not, in fact, performed an environmental impact study (EIA) before it began drilling.  The city contends that the law didn’t require an EIA.  Two national government bodies, the Department of Water and Sanitation and the Department of Environmental Affairs approved the project without an EIS.

Limberg elaborated to television news outlets that the city possesses expert analyses which it is following to mitigate any danger that may obtain from the drilling.  She reiterated that the city will extract no more water than the Department of Environmental Affairs allows them to extract.

The less sanguine view was expressed by Professor Adam West who teaches and researches under the auspices of the University of Cape Town and its Department of Biological Sciences.  He stated unequivocally that the species that may become endangered because of the drilling are endemic to this region.  Because of their rarity a full EIS should have been conducted and that the drilling has not gone so far that an EIS would no longer yield important data.

Professor West and others wrote a joint letter to the Cape Town city council expressing their concern.  The letter states that the city of Cape Town, if it continues drilling without a full EIS “will compromise critical ecological infrastructure upon which the health of the region and its people rely and potentially contravene several international agreements to which South Africa is a signatory.

According to the letter, one species in particular, the Mimetes Stokoei has such a small world population that this drilling could actually cause it to become extinct or nearly extinct.

The scientists also expressed their surprise that the Department of Environmental Affairs had not ordered a formal EIS because the overwhelming number of areas where drilling is taking place are already recognized as threatened ecosystems.

There are two levels of impact that concern ecologists.  The physical intrusion into sensitive areas includes people, vehicles, pipes, and so on.  In addition, they point out that as the city draws water from any alternative aquifer, the water table in that aquifer will inevitably decrease and the scientists are concerned for the future viability of plants that rely on a consistent water table.

The ecologists point to a similar ecological disaster that occurred near Perth, Australia where pumping is now strictly restricted due to massive dying out of species in the newly pumped aquifer.

The last powerful message from the scientists recognizes the deep existential crisis facing he city.  They clearly recognize the crisis; many of the signatories to the letter live in Cape Town.  But they point out that water from this drilling won’t become available until May, long after the city will have run out of water.