How to Play Three Card Poker 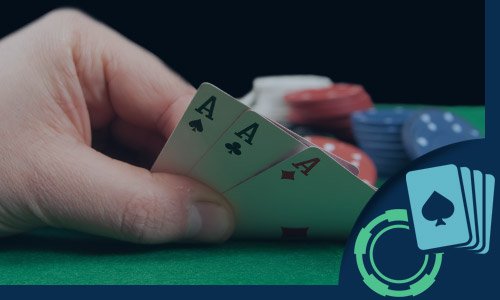 One of the less well-known table games we offer here at Thunderbolt Online Casino is three card poker.  A lot of players who try out this exciting casino game stick with it.  In this short blog, we’ll explain the rules and some playing strategy.

You place your ante bet and any side bet you wish to make.  Then all players get three cards and the dealer gets three cards as well.  Players go first as in blackjack.  You have the option at this point of raising or folding.  In online three card poker, the dealer can see your hand but you can’t see the dealer’s cards.  If you saw the dealer’s cards it would make it much easier for you to decide whether to raise or fold.

If you raise, you have to increase your bet by the size of your ante bet.  In theory, the player can win his or her ante bet with any hand. That’s because the dealer has to have at least a Queen or better to qualify to win.

This is where the house has its advantage; players often follow the odds and fold hands that they might have won.  The house doesn’t have to make any decisions in this game so players have to accept that there is a far better than 50-50 chance that the house will qualify with at least a queen and fold weak hands.

In the basic three card poker game, the dealer doesn’t make any decisions at all.  After all players have either raised or folded, the dealer turns up her cards.  If her hand qualifies, then the hierarchy of hands determines the winner of the hand.

If the dealer qualifies, the player can only win both of their bets, lose both bets, or push both bets.

If the dealer does not qualify, then the player wins his or her ante bet at a 1-1 rate but the raise bet is a push.

This is one of the more interesting aspects of three card poker.  In this poker variation, it is easier to get a flush than a straight so a straight is higher in the hierarchy of hands.  Other than this twist, the standard hierarchy prevails:

Obviously, there are no hands that require four or five cards!

You must be wondering what there is in three card poker to jazz it up a bit.  The first thing that adds a lot of excitement is the ante bonus.  if you have a straight, three of a kind, or a straight flush—the three highest hands—you get a bonus on your ante.

An additional really great part of the ante bonus is that you get the bonus even if the dealer beats your hand!  In those unusual circumstances, you would lose the ante and raise bets and win the ante bonus.

Even experienced dealers at land based casinos sometimes get confused by this last point: they forget to give a player his or her ante bonus when the dealer’s hand beat the player’s hand!  Even land based casino dealers can make mistakes.

But this never happens at Thunderbolt Casino because the dealer is perfectly programmed  computer software!

The statisticians have determined that the lowest hand a player should raise with is a Queen, six, and four.  This of course does not mean that you’ll certainly lose any given hand if you raise with queen, six, three.  It does mean that in the long run, you’ll lose some hands because you have a lower kicker.

The statisticians also say to avoid all side bets.  However, we offer the pair plus side bet because many players like it.  The extra payments with this side bet are much higher than the ante bonus so it certainly adds some pizzazz to the game.  We do however suggest that you make this bet only if you are substantially ahead in the session.

Healthy gambling is always gambling with money that you can afford to lose.  The odds against winning a giant government lottery are huge but someone always wins and there is nothing wrong with placing a small bet on a very long shot.

Three card poker is a fast paced online casino game that entertains and has very simple strategy.  A lot of slots players—who as a rule prefer games of chance over games of skill—take “side trips” to three card poker because it’s fun to play and the return to player rate is more than 98%.

The next time you’re looking for something new to try at Thunderbolt Casino, check out three card poker.   You might just find that you like it so much that you come back to it again and again!